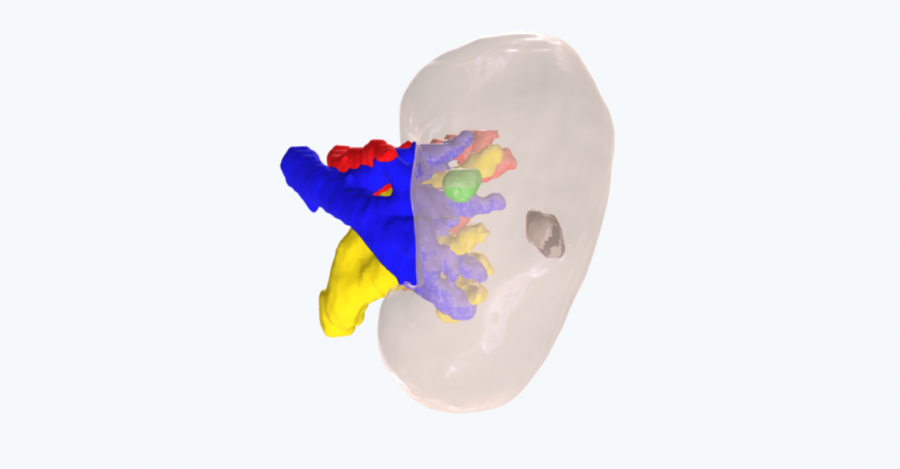 A dialysis-dependent, 22-year-old female with end-stage kidney failure secondary to reflux nephropathy, requiring a second kidney transplant was to receive an ABO-incompatible living donor transplant from her 45-year-old father who presented with a Bosniak 2F cyst.

A physical 1:1 scale model of a 45-year-old male’s donor kidney with existing Bosniak 2F renal cyst, was used in guiding a partial nephrectomy and living donor allotransplantation into a 22-year-old female with end-stage renal failure.

"During the course of work up of the donor, Computed Tomography imaging revealed a complex cyst (lesion) within the renal cortex. The cyst classification was Bosniak 2F with a small potential risk of malignancy. Clearly, transplanting a donor organ with a risk of malignancy or leaving the donor with a potential malignancy was unacceptable. The decision was taken to remove the kidney, excise the lesion on the back bench, reconstruct the kidney and then transplant the ‘lesion-free’ organ into the recipient. As the cyst was buried deep within the renal cortex and therefore invisible on the back bench, a replica 3D model was used for pre-operative planning. It’s difficult to underestimate how valuable this strategy was in terms of pre-operative planning and achieving successful clearance of the lesion."

With access to the 3D model, both procedures for donor and recipient were conducted successfully. The clinical team could completely remove the Bosniak 2F cyst from the donor kidney, confirm margin clearance from the pathologist in real time and subsequently complete an ABO incompatible transplant to the donor’s daughter. The recipient kidney achieved primary graft minutes after transplantation and kidney function remains excellent to date.

The 3D model was valuable in localizing the lesion, in order to achieve complete excision and tissue clearance. With the aid of the 3D model, the clinical team was able to exactly plan the procedure, ensure both patients were free from a long term potential tumor risk and achieve a complex, life-saving, kidney transplant.

Up next: Providing unparalleled insights and a significant reduction in procedure time with 3D printing

Lung cancer is the largest cause of cancer deaths worldwide, with over 1 million deaths from lung…

Benefits of a medical 3D model for this case: Reduced the operative time by a full 60…