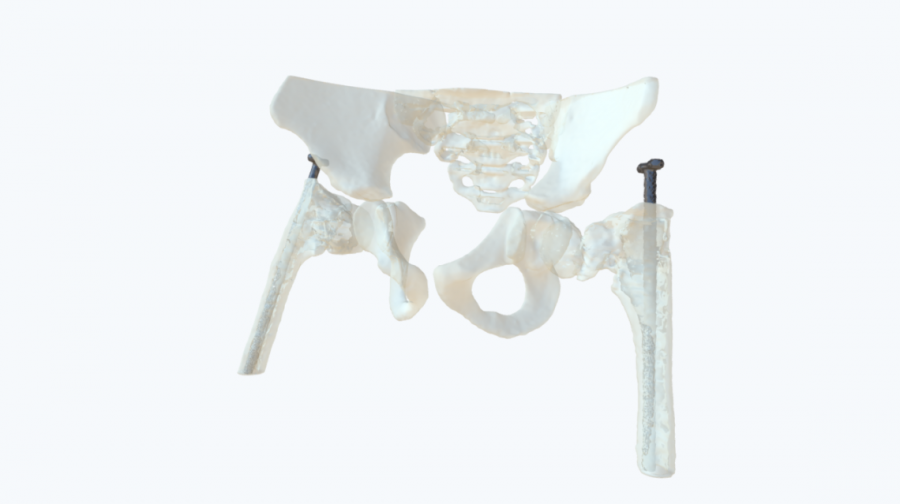 Physical 3D models were used to trial a novel procedure and measure equipment before the surgical intervention of a patient with severe osteogenesis imperfecta. The additional diagnosis was discovered with loss of bone growth on tibial head from the physical 3D model as well as giving a greater spatial understanding of the coxa vara of the patient’s pathology.

A male patient with osteogenesis imperfecta previously had Sheffield rodding of his femurs to protect against fractures. The patient then developed severe coxa vara on both femora which had an adverse effect on his walking. Due to the difficulty of the femoral geometry, the size of the patient, and the location of the femur, planning for surgical intervention was challenging. A 3D physical model of the patient’s CT scan provided a means for in-depth review.

The surgeon was provided with a clear 1:1 scale 3D physical printed model of the full pelvic girdle along with clear prints of proximal aspects for the left and right femora with the tubercular bone removed. For reference, the two Sheffield rods were printed in contrasting grey resin to indicate their position within the medullary cavity.

"With the Axial3D model, a trial operation was performed to ensure the implants that were going to be used would fit correctly. This greatly enhanced our surgical planning and confidence that operation was going to be a success. Several trial osteotomies could be performed using several different femoral models and the optimal solution was then selected for use for the final operative event."

The provided physical 3D models gave a much greater understanding of the pathology, showing to a greater extent the femora anatomy including the 3D rotation of the femoral shaft and the angle of the coxa vara internally. Additionally, a loss of bone growth was identified on the femoral necks not originally seen on the CT (Fig 3). The physical 3D models allowed for multiple iterations of the operation to be completed outside of the theater to provide the most effective, pretrial method of surgery for the patient.

Using the physical 3D printed model the surgeon was able to develop a new technique utilizing existing adult plates to correct the coxa vara and protect both the femoral head and shaft.

Additional information was also gleaned from the models, not seen on the CT scan, greatly enhancing the accuracy of diagnosis and enabling the surgeon to plan and trial the surgery more effectively.

Up next: Utilizing 3D modeling to better understand a complex ankle trauma fracture

Squamous cell carcinoma (SCC) is the most common form of malignancy in the head and neck. Quite…